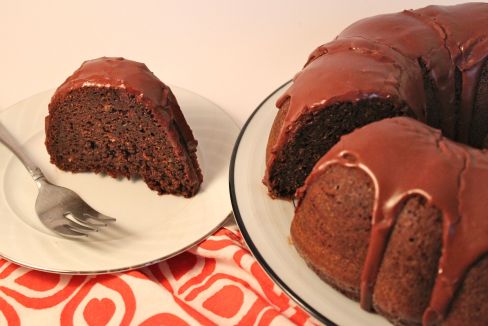 Inspired by St. Patrick’s Day, I wanted to make some food to compliment all the Guinness that will be consumed. Bangers and mash are on the menu , but I also wanted to add something sweet. Last weekend friends Allison & Zack came for a visit. Allison brought along a delicious treat for us – some chocolate stout cake she had made earlier in the week. After one bite, I was hooked. This recipe went straight to the top of my “what to make next” list. 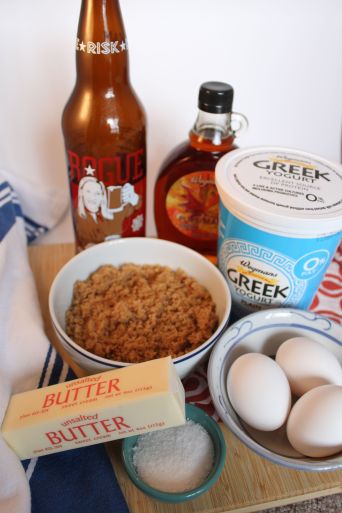 I made this in a bundt pan, but you could also make it in two round cake pans. You could try making this as cupcakes, but the cake might not be as moist. I went with a chocolate stout beer made by Rogue Ales. Any kind of stout or porter beer will work. By simmering the two cups of beer down to one cup, you are intensifying the flavors in the beer, so using a chocolate stout will compliment the cocoa powder in the cake. You can also just top this with some powdered sugar and you are good to go. 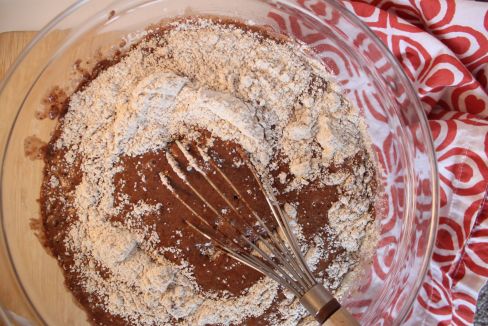 I made some changes from the original recipe. I used whole wheat white flour for the second cup, but regular whole wheat flour can be used. The original recipe called for plain full fat yogurt. I had some nonfat Greek yogurt on hand, so I used that instead. I added a few chocolate chips as well. 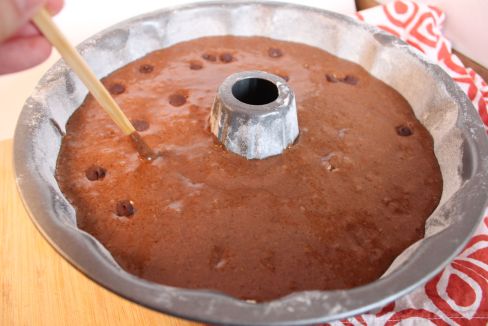 For the glaze, you can use any kind of milk or buttermilk (as called for in the original). I forgot to pick up some buttermilk, so I just used the nonfat milk I had in my fridge. This creates a thinner glaze than if using whole milk, cream, half & half, or buttermilk. 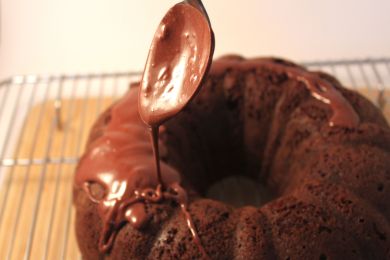 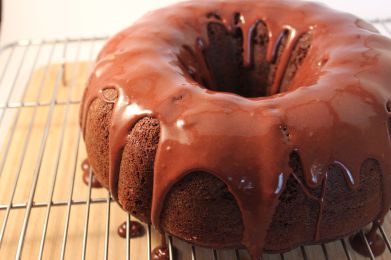 Preheat oven to 350 degrees. Butter and flour the bundt pan.

In a sauce pan, simmer down the two cups of beer until you have one cup of reduced beer. During the simmering process, I poured the beer into a measuring cup to track my progress. Once the beer has simmered down to one cup, remove pan from heat and add butter. Stir until butter is melted, then whisk in cocoa powder. Set aside and let cool.

In a medium bowl, whisk together flours, sugar, baking soda, and salt.

In a large bowl, whisk eggs, yogurt, and maple syrup. Gradually whisk in the cooled beer mixture until well blended. Stir in the flour mixture and chocolate chips (if you’re using them) until combined, but avoid over mixing. Pour into the prepared bundt pan. I forgot to add the chocolate chips before pouring the batter into the pan, so I sprinkled them on top and poked them into the batter with a chopstick.

Bake the cake for 35-45 minutes until a skewer or knife inserted into cake comes out relatively clean. You want to avoid over baking the cake and drying it out. Let the cake cool in the pan for 5-10 minutes, and then invert it onto a cooling rack. While the cake is cooling, whisk all the icing ingredients together. Once the cake is cool, spoon the icing over the cake and let it drip down the sides. Can be served as is, or with some vanilla ice cream on the side. 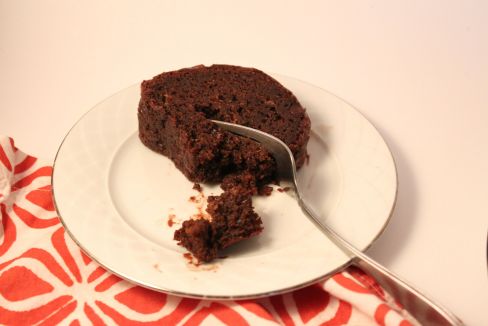